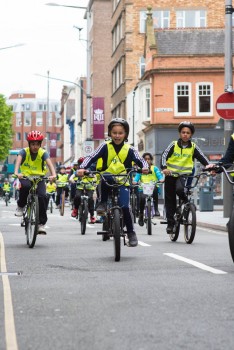 400 children pedal past, beaming smiles on their faces, doing their best to stay upright while waving frantically to the cheering onlookers. Looking down the line of cheeky grins and attempted wheelies, it’s easy to see why Leicester City Council is so invested in getting kids on bikes.

Studies have highlighted the reduced risks of cancer, type 2 diabetes, and improved mental health associated with cycling, alongside the inherent benefits of improved air quality, reduced noise pollution, increased play and activity opportunities for children. The physical, social and phycological benefits all add up to a better lifestyle, with a healthy productive local economy.

Last week, we were in Leicester for the Cycle City Active City conference. We spent most of the first day discussing options for recording bike trips over the short and long term with bike planners and cycle advocates. The second day of the event included the Schools Ride 2016, bringing students from 10 schools together to ride the streets, showing off their skills following completion of the Bikability cycle training.

For a brief period of time, cyclists took back the streets, like a timewarp to UK before cars.

It was an awesome sight to see, with 50 volunteers from Leicester City Council, Leicestershire County Council, British Cycling, Sustrans, Leicestershire Police, the schools and Giant UK Ltd, guiding the excited children through the streets of Leicester City. For a brief period of time, cyclists took back the streets, like a timewarp to UK before cars. Combining the ride with entertainment like children’s comedian Tiernan Douleb, Leicester City Football Club mascot Filbert the Fox and a demonstration by Pro freestyle BMX rider, Keelan Phillips, the children had a memorable experience with a consistent theme of cycling.

The city council’s Bikeability training programme has taught over 2,500 children and adults to ride with confidence over the last 12 months. Feedback from students has highlighted the positive outcomes of the program.

“I enjoyed Bikeability because it taught me important safety things that I did not know about… I think that everyone should do this in Year 5” – Year 5, St John the Baptist Church Of England Primary School.

The juxtaposition of the smiling children on bikes, with the lifelessness faces of drivers stuck in congestion or locked into their smartphones, highlights just how important it is to encourage cycling for the future of a happy healthy society.