Is cycling in Melbourne growing? 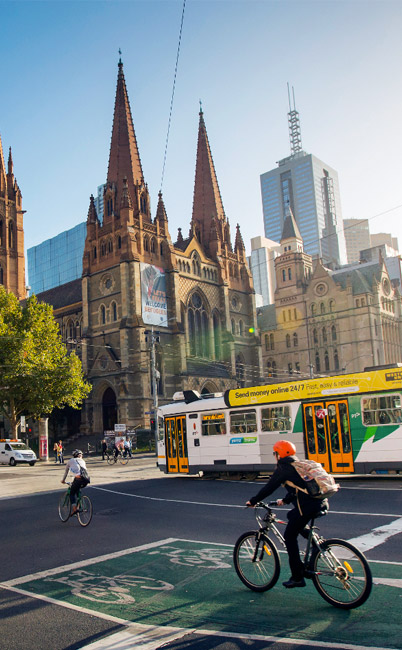 Melbourne is famous for its bars, record shops, laneways, cafes, fashion, and generally being one step ahead of the rest of Australia. In the past few years, the authorities have developed a 670 km network of bike paths around the city, attempting to bring the Melbourne cycling culture to European levels. But cycling in Melbourne isn’t easy. The winter is bitterly cold (by Australian standards), and recently a notorious vandal has been sprinkling thumbtacks over the road. So, has that discouraged cyclists or are more people biking in Melbourne?

MetroCount has been tasked with keeping track of cyclist numbers in the city, with our permanent bike counters recording every bike journey. The results of an ongoing survey between 2010 – 2015, have recently been published by VicRoads. Their analysis, presented below, shows that an increasing number of Melbournians are getting on their bike. Despite a notable decrease in cyclists during winter, year on year data from most sites shows an increasing volume of cycling trips.

Despite an evident seasonal variance, the data clearly shows more and more Melbournians are getting on their bike.

Along with cycling volumes, the number of permanent bike counters across Melbourne has also been increasing, enabling wider sampling into the future. Data is captured from a mix of shared paths as well as on-road cycle lanes and “Copenhagen-style” kerb-side separated cycle lanes. While the analysis below focuses on volume, the Advanced Bike Counter also identifies clusters of cyclists and provides accurate information on speed, direction, gap, and headway. An Australian developed and manufactured technology, MetroCount’s bike counters are used across the world, including cycling havens like Denmark and the Netherlands.

Those two black strips across the road are monitoring bikes!